On 11th  and 12th of February 2014 co2balance Kenya held a rigorous training in the Nairobi office then proceeded to the field in Aberdare’s one of co2balance project areas for practical’s. The training was attended by the three regional coordinators and myself; the newly recruited PDC in Kenya. Lloyd a UK based project manager who is in Kenya currently attended the training too while at the same time playing a key role of coordinating the whole training process.

The training couldn’t have come at a better time as it enabled me as a person and the rest of the team to visualize things that seemed vague initially and gain deeper understanding about the whole project cycle and other project nitty gritties. The training provided a rear opportunity for the trainees to gain a diversity of essential theoretical skills regarding various project monitoring surveys in terms of when and how they should be conducted, validation process,  verification, how to create and effectively use GPS maps, carrying out a water boiling test and many more.

We further took time in the field in one of co2balance project areas and had very informative practical lessons where the trainees were given an opportunity to put theory into practise with the guidance of the trainers. In the field we were joined by some of the education community liaison officers (ECLO’s). Seeing members of the team shed tears and some with their handkerchiefs blowing their running noses they developed after the kitchen got “smoked” by the three stone stove was a lifetime experience.  It was indeed a great learning experience working with the team in a small village kitchen carrying out a comparative WBT on both three stone and CZK stove. 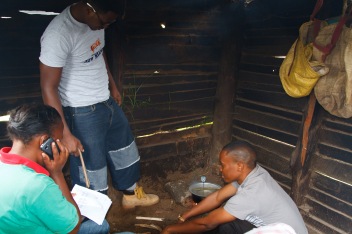 As away to measure impact of the training, trainees were asked to indicate their confidence in carrying out project tests and surveys and they all confirmed that their confidence had been increased. The regional coordinators and the ECLO’s who attended the training were tasked to go and train other staff on the project hence boost the technical knowhow of the whole Kenyan team in totality.

Good manners compel me on behalf of all trainees and the whole Kenyan team who will as a result benefit from this training thank the management of co2balance for having provided resources that were instrumental in facilitating this very important activity. Lloyd’s ability to coordinate the process remains commendable. I must also mention and thank the trainers (Jack and Teddy) too for their wonderful job.