Uganda is easily the most diverse nation on the African continent. At the formation of our borders back in 1914 and 1926, communities were split into two. At these borders nations were split into two different new countries under different administration. My own ancestral land is about 2 and a half miles from the border with the Democratic Republic of Congo in a region known as West Nile. There are more people of my nation, the Alur, in the DRC than there are in Uganda. Despite the West Nile being a relatively small region, it is also the most diverse region of Uganda with four different linguistic groups and this greatly differs from other regions. On the 21st of April we celebrate 100 years as part of Uganda, a nation we proudly call home.

I am a fond reader of history. I am intrigued by how linguistics and history are connected and it helps us understand the impact societies left on each other’s interactions. It is interesting how some names like the name Mugisa meaning “blessing” is similar all the way from the Alur people, a Luo nation, down to Rwanda where the version Mugisha is used but with the same meaning. It is evident that during our past interactions the word for blessing became common amongst our peoples. People will always be remembered for their impact, material or psychological. It’s always definitive when I am asked about my dreadlocked “Muzungu” friend because I know that it is Richard being described here.  He may not have said much to many of the people that ask but his style is something they proudly identify with. Previously Matt, Jonathan and Laure plus the “good woman” Ellie have left a positive imprint and are still identified as friends by people they have met along the way because of the friendly way in which they interacted with others and when a Ugandan tells you “we look forward to seeing you again soon”, it is not a statement of politeness but an invitation to a meal at a point in the future. No surprise why we are often referred to as the friendliest people on earth and anybody in East Africa looking for a happy fun time knows Kampala is the place to find it. 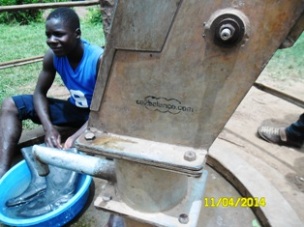 Co2balance people are leaving positive trails in the places where we work. The friendly humane way we interact with the local communities is only supplemented by our work in the communities. My first project area was in a place called Bulamagi in Iganga district. A historian once remarked how the name Bulamagi is a testament to a trail left by the Lamogi people while on their migration route. Interestingly Iganga could in some circles be seen as I gang’a which in one Luo dialect means “in my home”.

We built a very good relationship with both the communities and our project partner WAACHA during our first project. This place was often the source of the fruits we had in the office and in our homes that were either bought from the communities or were received as gifts from them in appreciation for the work we were doing in our cookstove project. It was no surprise early this year, when WAACHA expressed further interest in partnering with us in our prospective projects. As they had done splendid job for us as well, we were very positive about working with them. This coming week we shall be starting work on feasibility assessments for a borehole project in Kaliro district in Eastern Uganda. It is a prospect I am looking to with anticipation as I believe this will bring as much success and impact as our previous four borehole projects in the North and will as well open up a new frontier for borehole projects in the East.

Our carbon projects have been lauded for the strategic impact we make in areas that affect communities directly and it is with that same spirit that we look to open up our newest door. That will be after the short Easter break though and hopefully we shall all be pumped up to excel some more. Happy Easter everybody and let’s keep it positive!!!