In partnership with our local NGO partner Rwandans4Water, we have finished the rehabilitation further 30 boreholes in Gatsibo district this month. According to the data collected on the field, it means that at least 15,000 more people have now access to clean water, many of them are young children. Borehole users are also involved in community sensitization programme and in the monitoring so our project partner can always have the most up-to-date information from each and every boreholes. Rwandans4Water  have complied a fantastic video of their ongoing work in the district which also features the projects we are working on together, please have a look!

In partnership with our local NGO partner Rwandans4Water, we have finished the rehabilitation further 30 boreholes in Gatsibo district this month. According to the data collected on the field, it means that at least 15,000 more people have now access to clean water, many of them are young children. Borehole users are also involved in community sensitization programme and in the monitoring so our project partner can always have the most up-to-date information from each and every boreholes. Rwandans4Water  have complied a fantastic video of their ongoing work in the district which also features the projects we are working on together, please have a look!

As a result of its pioneering global micro Programme of Activities (mPoA), co2balance are assisting partners develop projects in countries that have yet to see much benefit from carbon finance initiatives. The most recent additions to our PoA are GS 4422 and 4423 which are first of its kind clean water borehole VPAs in Zoba Maekel, Eritrea.  These VPAs are implemented along with our partners Vita an Irish Charity. Both projects proceeded to the Gold Standard listing process this week. Watch this space for updates from the borehole rehabilitation programme as the success of these projects goes from strength to strength.

Vita Team addressing the stakeholders in the district

My name is Richard Stone and I thought I would write a quick introduction after joining the CO2balance team this week. I’ve recently graduated from the Master of Environmental Sciences programme at the University of Southampton and I’m excited to be joining a team with such a high level of expertise in finding quality climate change adaption solutions. I live locally in the South West of the UK and I am happy to be joining the Taunton office where it is clear everyone is very enthusiastic and knowledgeable about the carbon management industry. Already I feel welcome, I have relaxed in to the office and I am excited about being able to contribute to the team and to the valuable work that they do. I’m very much looking forward to getting up to speed on all the on-going work and working with the rest of the team in the future!

A bit of background about myself – before joining CO2balance I’ve done a lot of cycling, swimming and running and I’ve included a picture of myself at the end of my cycle across the length of the UK, from John O’Groat’s Lands’ End. 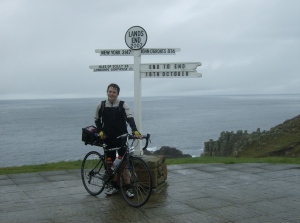 I joined Co2balance on June 15, 2015 as a Project Development Coordinator for the projects in Uganda mainly in the Lango sub region and Kaliro district in Eastern Uganda.

I was very keen to learn more about carbon finance in relation to water projects and this is what Co2balance has to offer.

My orientation covered visits to the projects that included Kole, Otuke, Alebtong, Dokolo and Kaliro districts and it was a great experience meeting the borehole users who were so enthusiastic and appreciative of the projects that had been introduced to provide constant safe water.

Growing up, I had always wished to live in the Lango sub region of Uganda (which borders the hometown I hail from) because of it’s good climate and friendly community.

In February 2004, my wishes were clouded by the invasion of the Lord’s Resistance Army, a rebel terrorist group led by Joseph Kony that attacked and killed innocent civilians irrespective of gender and age, widespread human rights violations like abduction, mutilation, child-sex slavery, and forcing children to participate in hostile acts.

They wiped out hundreds of people from the northern and north-eastern part of Uganda. This also saw many people being abducted and children turned into child soldiers.

This led to many people fleeing for their lives and they ended up in settlement camps with so little provisions to even cover their basic needs. Led by the top LRA commander Okot Odhiambo, the rebels attacked one of the Internally Displaced Persons (IDPs) camp in Barlonyo and killed over 300 civilians and abducted others.

Few years later, the war ceased with the fleeing of the rebels and people decided to go back to their home towns because the situation in the camps were appalling. The government with the help of aid agencies helped secure the areas for the people and drilled boreholes to offer clean water as one of the basic needs of the community. However, as a result of a high population and lack of maintenance, these boreholes broke down and people went back to using unprotected open wells which saw an increase in water borne diseases like typhoid, cholera, etc coupled by so much fear of walking to distant water sources lest they are again attacked by the rebels.

Co2balance with its borehole rehabilitation and maintenance project has seen many of these boreholes repaired and clean water is now easily accessible to the communities – of which they much appreciate.

‘We the women no longer have to walk for many kilometres to open wells to collect water as the repair of the boreholes has made clean water more accessible…’ said a one Agnes Olila.

During our visit of Otuke District, we had a chance to visit Barlonyo Memorial site where 121 victims of the LRA were buried in mass graves. This still leaves a big scar on the hearts of the people in the Lango region who lost their loved ones to this great injustice.

Since the beginning of 2014 CO2balance has been working in partnership with World Vision on the implementation of two Gold Standard improved cookstove VPAs located in the Rift Valley Province, Kenya. GS3079 Wema Improved Cookstoves and GS3080 Mogotio Improved Cookstoves aim to address the environmental, social and economic problems associated with cooking on three stone fires by promoting energy efficient cook-stoves to households through established micro-finance institutions, thereby making them more affordable. Furthermore, local stove producers can also benefit from the security of joining a long term initiative.

Since the project started, approximately 2000 improved cookstoves have been purchased by households in the project areas which has already had a significant impact on reducing wood consumption and carbon emissions. Over the last 8 months, approximately 1000 tonnes of wood have been saved across the two VPAs which equates to around 1700 tonnes of avoided CO2.

We are pleased to announce that the projects are now officially registered under the Gold Standard, representing a key milestone in the carbon project cycle.

It is estimated that 2.7 billion people worldwide, who mostly live on incomes of less than US$2/day, depend on solid biomass fuels (fuelwood, charcoal, animal dung, grass, shrubs, agricultural residue) to meet their basic energy needs for cooking and heating. Many of these people cook on open fires, often inside their homes. As well as being very inefficient in the use of scarce firewood, women and children are exposed to harmful levels of wood smoke, which is a major cause of respiratory disease and premature death. Cook stoves are estimated to contribute around a third of global carbon monoxide emissions while the black carbon particles and other pollutants in biomass smoke are also thought to play a role in global warming.

Improved cook stoves, designed to burn biomass fuels more cleanly and efficiently than traditional stoves, have been promoted by charities and governments in many developing countries since the 1970s. A variety of approaches have been tried, including “build-your-own stove” projects, community-focused participatory schemes, manufacturing stoves in remote villages and market-based commercial activities.

In other countries, the progress has been less spectacular. Schemes have failed for a whole range of reasons which are only partially understood. Reasons for failure include: cost of the new stoves, cultural resistance to change, negative experience with previous “development” projects, lack of fuel, failure to understand users’ needs and so on. Some stove initiatives have relied solely on the attraction of new technologies rather than taking a more holistic approach which learns from past mistakes and also from successful intervention projects.
The cost of energy efficient cook stoves is relatively high. Hence, most of the targeted households cannot afford them. In attempt to enhance demand, uptake, and adoption, Carbon Zero Kenya has adopted a participatory and cost effective approach. The approach has led to the training of local communities on stove production; sourcing stove materials from local materials thus enhancing affordability and access to efficient cook stoves. Carbon Zero seeks to produce very low cost cook stoves that low income earners can easily afford and still acquire the fuel efficiency.

In order to enhance adoption and utilization of efficient cook-stoves, Carbon Zero undertakes education, community sensitization and awareness creation to address health, livelihood and quality of life. Through regularized usage surveys, qualitative data collected and analyzed help in addressing the socio-cultural concerns/needs of the target beneficiaries/community.
Carbon Zero continues to widely research and develop cheaper but efficient stoves taking into cognizant that continuous innovation as well as testing of technology in use assist in stove improvement.
Carbon Zero keeps on sharing experiences and expertise on market development for efficient cook stoves and socio-enterprise community organizing for enhanced household efficient cook-stove adoption.