Until 2005, Betty Amuge and her family of four children had to trek 3 kilometers each day to an unprotected spring to get about 120 litres of water for drinking, cooking, washing and personal hygiene. There was a borehole in her village, Akaidebe, in Omoro Sub-county in Alebtong district, but it hardly functioned as no one saw to its maintenance. In 2005, a solar powered water pump was installed in a bore well and it came as a relief to her and the entire village because not only did it save them from traveling long insecure distances to fetch water but it also meant that they finally had clean safe water.

“The installation of this water pump improved our lives…,” narrated Betty. “Not only did the pump save us considerable time and effort, but it also improved on our health as we no longer suffered from water borne diseases”.

With her spare time, she was also able to do a lot of income generating activities to help look after her family and provide for their basic needs.

Five years later, one fateful day, they woke up to the news of the solar pump breakdown. This greatly devastated them as it simply meant they had to go back to the traditional water sources that they used before. 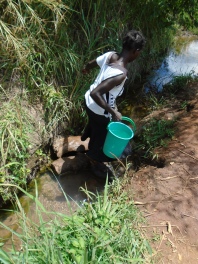 Some rural areas are fortunate to have a borehole that can provide them with clean safe water but most are not so lucky. Across the African continent, half of all rural households do not have access to clean drinking water; they must rely on water sources that may be unhealthy. The situation is better in urban areas, where 80 per cent of the population is covered.

A lot still needs to be done to bring clean water to so many households.

Deforestation is considered to be one of the contributing factors to global climate change. One problem caused by deforestation is the impact on the global carbon cycle. If greenhouse gases are in large enough quantity, they can force climate change. Carbon dioxide (CO2) is the most prevalent greenhouse gas. Trees can help a lot as it’s estimated that about 300 billion tons of carbon is stored in trees, according to Greenpeace.

The deforestation of trees not only lessens the amount of carbon stored, it also releases carbon dioxide into the air. This is because when trees die, they release the stored carbon. According to the 2010 Global Forest Resources Assessment, deforestation releases nearly a billion tons of carbon into the atmosphere per year. Deforestation is the second largest anthropogenic source of carbon dioxide to the atmosphere, ranging between 6 percent and 17 percent. (Van Der Werf, G. R. et al., 2009).

Worldwide deforestation accounts for 25-30 percent of annual CO2 global emissions, the result of the burning of brushland for subsistence agriculture and wood fires used for cooking. A surging population in Africa seeking to provide energy for cooking needs has led to massive environmental damage, including deforestation.
Nowhere is this more pronounced than in Africa, where a 2007 United Nations Food and Agriculture Organization (FAO) forest report stated, “in Africa, almost 90 percent of all (forest) wood removals are used for energy.” 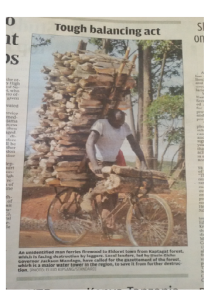 Many organizations thought of ways to combat this worrying trend on this very vital forest. Carbon Zero Kenya could similarly not just sit and watch thus started an improved cook stove project in the area. 16,000 cook stoves were distributed in the area and the results so far have been promising. 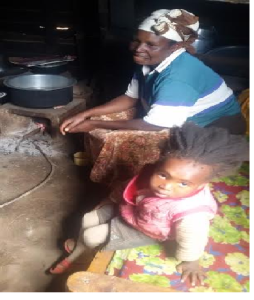 The improved cook stove came in handy to reduce on amount of wood spent on cooking by replacing three stone /traditional stoves which over time have been consuming high volumes of firewood and even demanding for more hence increasing levels of deforestation. Traditional stoves have low combustion efficiency, leading to higher cooking times and inefficient use of fuel wood. Introduction of the improved cook stoves by Carbon Zero will lead to the revamping of Kaptagat forest while at the same time cutting down on wood use hence reducing greenhouse gas emissions.

Next week will mark the anniversary of the rehabilitation of the first Rwandan boreholes in the frame of the successful partnership of co2balance and Climate Corporation Emission Tradning GmbH. The first 12 boreholes rehabilitated in Gatsibo district has been in operation for nearly a year and have been supplying fresh and clean water to the local communities. According to the monitoring studies conducted by our in-country partner Rwandans4Water, on average more than 500 people are served by one borehole, meaning that just the first 12 borehole provide clean water to 6,000 people. This is a great achievement in a sector, according to the Rwanda Ministry of Infrastructure (2010), the sustainable operation and management of rural water supply infrastructure is one of the key challenges with approximately one third of the existing infrastructure (about 850 rural water systems) needs rehabilitation. Please see the photos of few of those 12 borehole below and stay tuned for more good news from Gatsibo district, Rwanda. 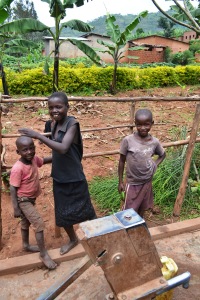 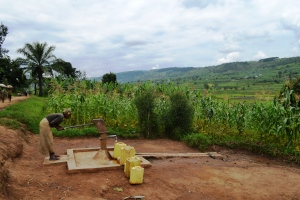 Over the past week, I had the pleasure of attending two site visits verifying our Gold Standard projects; Meru and West Kisumu. There were many humbling conversations with stove beneficiaries who were delighted with our improved cook stoves and full of gratitude for the work and impact of co2balance projects. Below is a collection of photos from the team and the trip.

Asante sana to all ! 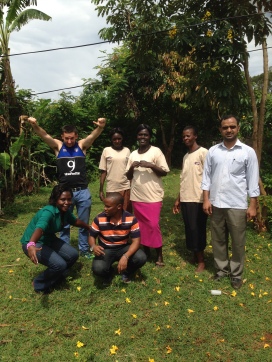 On a very happy meeting with the local Women’s Group who constructed the Artisanal Stoves in West Kisumu. with Moses, Christine and Chetan.

Moses and myself discussing the quality of Kenyan Tea and the means of production (which was stewing in the pot). Our conversation was exciting based on our persistent disagreement on the merits of Kenyan Tea over English Breakfast Tea 🙂 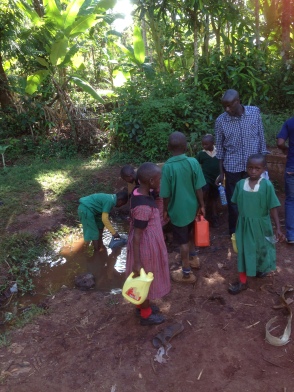 There are various ways of disinfecting wells but the most common is chlorination as it leaves a residual disinfectant in the water after chlorination.

In a bid to provide clean water and eliminate the use of firewood to purify water, chlorination is one of the most effective ways of disinfecting water.

Over a couple of weeks, Co2balance has carried out chlorination and reactive repair of some of its sites in the Lango sub-region. Chlorination of 20 boreholes was done in the Districts of Kole and Alebtong. 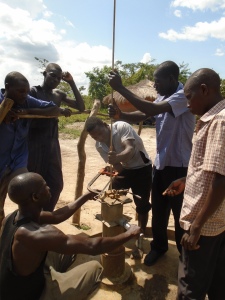 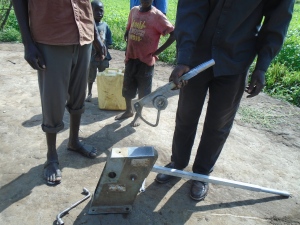 Most of the world’s people live at or below the poverty line especially from the developing world. That means that they either don’t have the money to buy even the most basic things, like food or shelter, or they have just enough to keep surviving from day to day. They spend most of their time working in the fields or otherwise earning their daily bread, which they must then cook over traditional three stone stoves.

It takes a lot of hard labour and time to find, cut, and carry back the wood that’s used for cooking, and this job takes up a major part of the day for women and girls thus denying them time to engage in other vital activities i.e. income generating activities.

Cooking over open fires on traditional stoves is also bad for the health. When burned, wood don’t combust fully, or get burnt, completely. As a result gases are given off that are toxic to people and bad for the environment. Such gases include carbon monoxide, nitrogen oxide, sulphur oxide, and organic compounds. This ‘incomplete combustion’ also releases tiny particles of matter into the air, which are so small that they can be breathed-in by people and animals. When inhaled, they get lodged in the respiratory tract, and help cause a disease called ‘acute respiratory infection’. Acute Respiratory Infection is the leading cause of illness in developing nations. Unfortunately, most of the people in developing nations don’t have money for health care. It is estimated that air pollution caused by inefficient stoves leads to 4.3 million premature deaths each year – more than those from malaria, tuberculosis and HIV/Aids.

In Kenya the case is not different either. Many families rely on wood cook stoves in their day-to-day cooking activities an efficient cook stove is needed for the purpose. From dawn to dusk cooking activities and others like firewood collection dominate the better part of the day. It is therefore a relieve on those responsible for these activities especially women and girls with the use of carbon zero stove as it minimizes wood usage, produces less smoke which is good to the environment and to our health too.

As we traverse the villages of the project area in Kaptagat region where Carbon Zero has distributed about 16000 cook stoves we meet beneficiaries of Carbon Zero Stoves who are happy to narrate their transformation stories.

The stoves have gone a long way, increasing savings from wood purchase and conserving the environment by reducing air pollution which in turn affects on weather patterns. As we also visit the nearby health center within the project area, we find that chronic respiratory diseases e.g. coughs, allergies and eye irritations especially in children have reduced drastically over time since the distribution of the improved energy cook stoves by Carbon Zero which gives the project a plus in its activities in the region.

With proper use and maintenance, the Carbon Zero stove has been shown to reduce fuel use by 40 to 50%. This means less wood is burned thus fewer trees have to be cut down. This also means less labor in looking for and chopping firewood. The stove also reduces emissions from incomplete combustion, such as toxic gases and particulate matter, resulting in better overall health of the users.

Several beneficiaries among them Mrs. Chumo a mother of five is among those who lead the community in sensitizing on the Carbon Zero cook stove usage as it brings forth many benefits. She says, “Kila wakati ninapoenda kwenye mikutano na hakikisha kuwa watu wanaelewa matumizi ya hizi jiko”. She continues to explain that in her village every household maximizes its usage as they have now realized that it greatly minimizes wood usage and saved time from forest travels is spent on other useful activities by both children and adults.

CO2balance are celebrating somewhat of a milestone this week as we submit our 50th project under our global micro Programme of Activities (mPoA) GS1247! Together, our projects have had a huge impact, reducing global carbon emissions and improving livelihoods in some of the world’s poorest communities.

This is a significant flag in the ground and it coincides with the commitment from World Leaders to 17 Global Goals in the hope of achieving three extraordinary things; ending extreme poverty, fighting inequality and mitigating climate change. As we continue to develop projects across the globe we are proud to be able to see and measure the tangible benefits that our projects have and how they are contributing towards achieving these goals.

Find out more about the Global Goals here http://www.globalgoals.org/

On the 16th of September another successful Local Stakeholder Consultation took place in Gashora, Rwanda which marked the launch of a new cookstove projects in Bugasera sector. The projects will be implemented in the frame of a partnership between co2balance UK Ltd and Climate Corporation Emissions Trading GmbH, while the field activities will be facilitated by our in-country partner FAPDR with whom we have successfully worked together in previous projects.  The stakeholder consultation started at 10:00am and was attended by a high number of participants from six sectors of the district as well as by the representatives ofClimate Corporation Emissions Trading GmbH and co2balance UK Ltd. FAPDR took an active role in the moderation of the meeting which was held both in Kinyarwandan and English. After answering the questions from participants, the meeting was concluded with stove demonstration and the closing ceremony, following Gold Standard guidance. Please see some pictures  of the meeting below and stay tuned for updates about this new project. 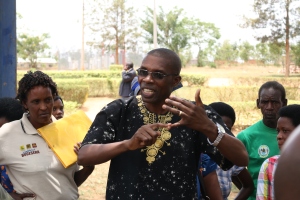 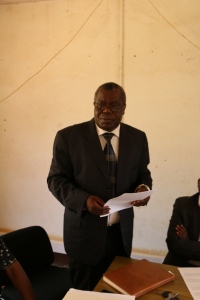