Since 2013, CO2balance has been developing a number of borehole rehabilitation projects in Uganda under the Gold Standard voluntary carbon offset scheme. After almost 2 years, we are glad to announce that 4 VPAs in the Lango sub-region (Dokolo, Alebtong and Otuke Districts) have recently issued carbon credits for the first time. This is a major achievement for everyone that has been involved in the projects, in particular our staff in Uganda who have worked extensively with the communities and other local stakeholders to garner support and ensure that there is participation at all levels. Although this may seem straightforward, in practice there are a plethora of challenges that need to be negotiated especially when operating in such remote and poverty stricken environments.
Between 1987 and 2007, the Lango sub-region was subject to countless human rights atrocities by Joseph Kony’s Lord’s Resistance Army (LRA) which has had long lasting impacts on the social and economic fabric of the affected areas . It is estimated that over 20,000 children were abducted by the LRA many of whom were forced to commit horrific acts of violence. Around 1 million people fled their homes and ended up moving to temporary camps for the internally displaced (IDPs). The prolonged period of conflict inevitably led to the deterioration of institutions and basic services. All the challenges related to rebuilding a war-torn region are evident, from stabilising the economy and restoring infrastructure to reintegrating former members of the LRA and addressing human rights abuses.

Memorial Site for the 2004 LRA Massacre in Otuke District

Building a biogas plant for a local school in Barlonyo

Over the last 3 years, CO2balance has rehabilitated 41 boreholes in the Lango sub-region  which supply clean water to over 20,000 people who previously relied on open water sources such as lakes and ponds. As local governments lack sufficient funds for water infrastructure, these projects are playing a small but important role in the region’s post conflict development. 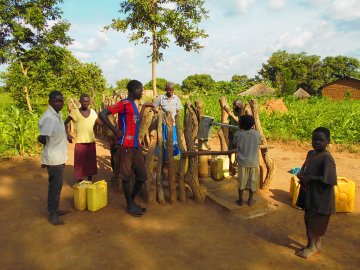 One of CO2balance’s rehabilitated boreholes in the Lango sub-region