With the support of Australian High Commission in Kenya in the 2015 Carbon Zero Kenya partnered with a women group (Umeme women group) in Western Kenya in Kisumu West to produce 900 cook stoves and sell them within the community. The women were empowered with skills in stove production and marketing. 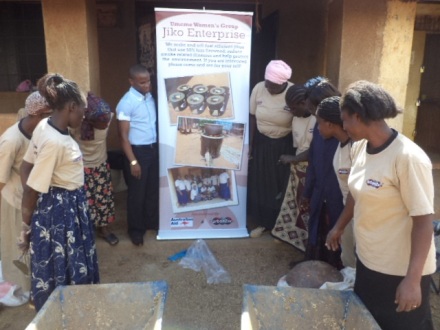 The aim of the Umeme Women’s Group Improved Cook Stove Project was to set up a self sustaining cook stove enterprise that was to construct and sell stoves within the local community. The project created some source of income for the women and thus enabling them improve their living standards.

Just to offer some background an acute shortage of fuel for cooking is one of the many problems faced by people in Kisumu West as it is the case in other parts of the country. Gathering fuel is generally women’s work but is fraught with dangers; they gamble with the risk of rape and life threatening attacks during their search for much needed firewood, in order to feed their families. In certain areas, local sources of firewood are completely depleted, leading women to travel further and further afield or to dig up tree roots, eliminating any chance of the trees growing again. Even if women survive this, they are still exposing themselves and their children to potentially deadly smoke fumes.

With the above challenges in mind and the financial support from the Australian High Commission Carbon Zero decided to tackle the challenges in Kisumu West through the use of more fuel-efficient Carbon Zero Artisanal Stove, which is both affordable and easy to use; cutting the amount of risky trips for firewood and allowing more trees the opportunity to grow. Subsequently, burning smaller amounts wood fuel means less smoke will engulf their homes and their lungs.

Carbon Zero Kenya mapped out several women groups in the area; vetted them and settled on one that was most convincing – Umeme women group. The group of ten women was well trained both in theory and practicals of artisanal stove production. After which the women were supported to source for materials and stove parts and produced a total of 900 cook stoves that they marketed within their community. The revenues collected from the sales helped the women earn an extra income. In addition the women started making weekly savings into a central kitty that they have been able to invest overtime further raising their incomes which has in a big way boosted their living standards.

Diana   is one of the women group members; the secretary of the group. Speaking to her she elaborates that prior to this project had always used the three stone cooker ever since she was born and had never seen an alternative cook stove. She says that previously she didn’t know how expensive it was sustaining a three stone stove. Knowing well that Kisumu West has fewer forests with most land under farming the only way to get firewood was and still is through buying. While using the three stone stove she says she used to buy wood worth 800/= Kenya shillings per week and this was too expensive for her. 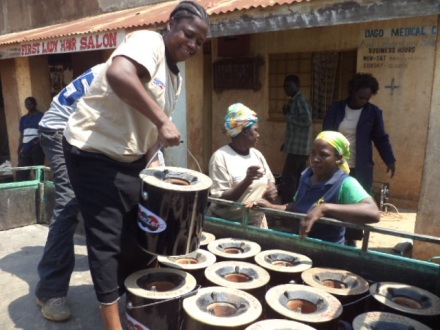 However she says that her turning point came in 2015 when together with the other women were selected to be trained on how to manufacture artisanal stoves and market them within their community. Diana says that after they were trained as a group they produced a total of 900 stoves that they sold out to locals. She gained skills in stove production, maintenance and also simple business skills that have been very essential in her life thereafter. As a group under her leadership the proceeds from sale of stoves were put into a table banking revolving fund that members have overtime been borrowing and paying back with little interest. She says that many group members have borrowed money and paid school fees for their children, some have borrowed to start different businesses and as they pay back their revolving fund has been growing and today they have even increased their membership. 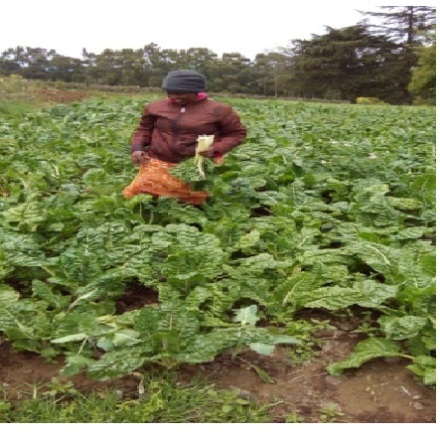 Diana explains how she borrowed from the group and started vegetable farming. The project has been on for the last two years and the returns are good. She is able to get an extra income to pay fees for her kids while at the same time get something to keep making contributions in the women group.  She explains that since she did not have formal employment she couldn’t borrow from the bank hence the capital they got from the sales of the stoves helped inject capital into their group that has seen them grow both individually and as a group in ways she cannot explain.

She further explains that many women call her within the local community at times to repair their stoves when they have for instance cracks and they pay her helping earn her earn her income.  She says today she her community as a stoves maintenance expert in the community. Within her own home Diana says that ever since she received the CZK stove she has seen a big difference in her life. For instance the improved cook stove saves wood fuel which enables her channel some of the money she would spend buying firewood to other development projects. As we part Diana says that for her the biggest thing out of the stove production enterprise set by Carbon Zero is that she was able to save and start a farming venture that has really improved her family’s income. She says that the project gave them power to improve their lives and turn around their fate.