Jaspher Opio is a proud beneficiary of the CO2balance Safe Water project in Lango sub region, Northern Uganda. Jaspher lives in a village called Agengi in Dokolo District. He and his wife Susan have two children and 5 dependents. Susan and the family collect water from Aminalucu Borehole which is 250 meters away from their household.

According to Jaspher, before CO2balance intervention, people around his village used to collect water from very unsafe source. Villagers would spend lot time collecting water and fuel for purification. The main source at that time was an open well which had become a health hazard due to poor water quality. Also, children risked drowning in the well.

Aminalucu Borehole (for domestic use) in Dokolo District, Uganda

‘I am a proud owner of a nursery tree seedling business which I started two years ago and this has increased my household income from 2,500,000 to 5,000,000 Uganda Shillings per season. I grow different tree species like Malaina, Clone Eucalyptus, Pines, and Ashock’ says Japher.

He adds that the initial investment cost for the nursery bed was 2,470,000 UGX (around £500), which he acquired as a loan from a village savings group.

According to Opio, his nursery bed employs 5 workers: two males and three females who are also water users of Aminalucu borehole.

‘the 3 female employees who work for me also live close to the borehole and say that they are now able to work at the tree seedling nursery because they no longer spend long hours in search of water’ added Japher.

Japher’s wife Susan, together with the adult dependents in their household, also help him at the nursery business which initially was not possible because they spent hours travelling long distances in search of water before the borehole was rehabilitated.

Currently his nursery bed is having 1,700 root stocks capable of raising 30,000 to 40,000 seedling of Eucalyptus trees whose potential average total sales is 24,000,000 UGX per year (around £5,000). Japher intends to invest this income in expanding his boda boda (motor cycle transport) business and also start a free range poultry system which will be managed entirely by his wife.

Susan is so happy with the time saved in collecting water from far off sources because she’s able to use it to support their family businesses and contribute to the household income.

The Lango Safe Water Project reduces CO2 emissions by removing the need for households to boil water as a treatment method. As well as reducing CO2 emissions, the project provides safe drinking water and greatly reduces the time spend collecting water and firewood, and reduces the time spent boiling the water. As shown by the story of Jaspher and Susan, this time can be investing in businesses which benefit the household and the wider community through employment.

Today we are celebrating World Environment Day, an annual event created by the United Nations in 1974 to encourage worldwide awareness and action to protect our environment. Since its creation, the event has grown to become a global movement for public outreach for the need of environmental action. Each World Environment Day has a new theme and is hosted in a different country where the official celebrations take place – this years host is China, with the theme of air pollution.

Summarised from the World Environment Day website, the main source of household air pollution is the indoor burning of fossil fuels and biomass-based resources, such as firewood, to cook. Around 3.8 million premature deaths are caused by indoor air pollution annually, most in the developing world. Despite efforts to increase the prevalence of cleaner burning stoves and cleaner fuel, 3 billion continue to use solid fuels on open fires.

Across the areas we work in in developing countries, we typically come across households in rural communities using highly inefficient three-stone fires for their cooking and boiling of unsafe water for purification. These traditional fires require large amounts of firewood to do only a small amount of work due to their inefficient nature.

As a result of burning large quantities of firewood on these open fires, large volumes of carbon emissions are released contributing to climate change, as well as harmful pollutants causing significant health problems to those regularly exposed to them, such as the elderly, women and children.

Our improved cookstove carbon projects involve introducing improved technologies, such as improved cookstoves, into households through community buy-in schemes. With the help from our local partners, communities are trained how to use and maintain the stoves effectively and educated on the dangers of indoor air pollution and how the new stoves are helping tackle it. Our safe water projects involve rehabilitating safe water sources, to reduce the amount of firewood burned on three-stone fires by removing the need to purify unclean water.

Our projects directly contribute to tackling Sustainable Development Goal 3 – Good Health and Wellbeing. Through robust monitoring and calculations within our cookstove projects and certain water projects, we determine the reduction in household air pollution following the project implementation, which are certified by the verification body Gold Standard.

Millions of people are continuing to suffer from preventable diseases and many are dying prematurely – World Environment Day is helping raise awareness of this widespread problem and drive incentive for action. Through focused, community initiatives involving education and key training, the adoption of cleaner, more modern stoves and rehabilitation of broken safe water sources can reduce the risk of illnesses and save lives. 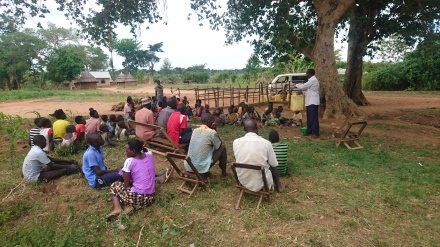 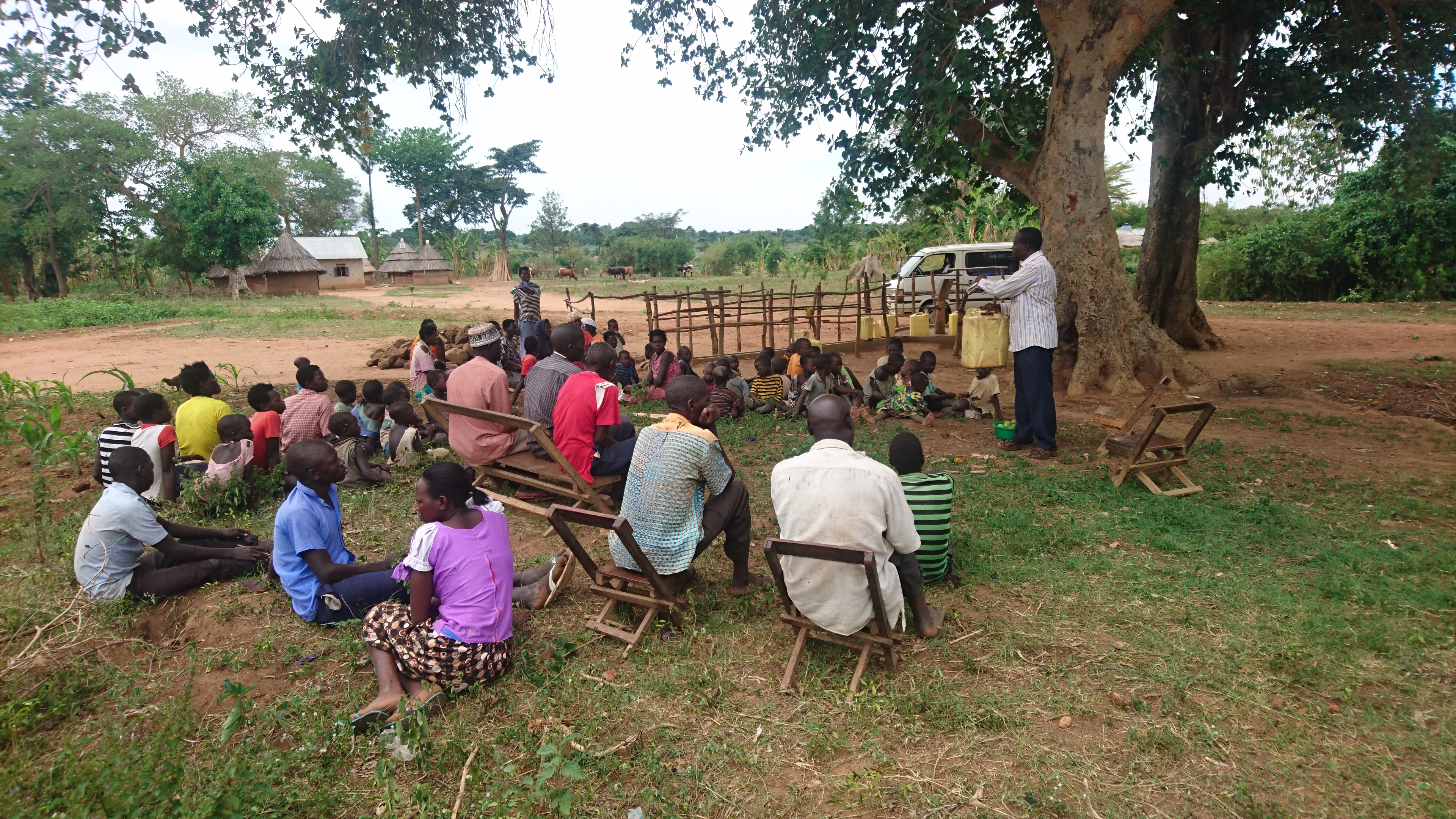 The purpose of the annual training is to sensitise the communities on important issues such as keeping the area around the borehole clean and storing water correctly. The training takes place every year to reinforce these values.

These important visits ensure that the project boreholes can be properly maintained by the communities, thus protecting the long-term future of the water point. The practises and techniques taught also help protect the groundwater from contamination and ensure that the water is stored safely at home.

The Kaliro Safe Water project reduces CO2 emissions by providing communities with safe water, so they no longer need to boil water with firewood as a treatment method. The WASH training are used along side water quality testing to ensure that the communities are consuming safe water year round. As well as reducing CO2 emissions, this project provides safe water to rural communities and cuts cases of water-borne diseases and diarrhoea.

Considered one of the most severe tropical cyclones to hit the Southern Hemisphere, Tropical Cyclone Idai made landfall at the port city of Biera, Mozambique on Thursday 14th March. Winds were reported to have exceeded 177km/h (106mph), leaving a trail of devastation as it moved inland. In its wake, Idai devastated critical infrastructure in the provinces of Sofala, Zambezia, Manica and Tete, including electricity, communication and road networks.

Many of the severely affected areas are inaccessible, cut off by extensive flooding and destroyed or disrupted transport routes, leaving hundreds of thousands of cyclone victims isolated from emergency relief efforts. Many of these inaccessible areas are uncontactable, although where contact has been made it is reported food, water and supplies are coming to the end, with only a few days worth remaining.

We are currently working on establishing safe water projects in Manica Province with not-for-profit organisation Village Water, who are currently in Mozambique on the ground working tirelessly assisting with local relief efforts and ensuring their teams on the ground are safe. The official death roll is currently at 300, although it could rise to above 1,000, with 217 confirmed in Mozambique. There are a reported 15,000 people still in need of rescue, it is unknown how many amongst these are accounted for or missing. According to our local partners working the project area, in Chimoio town in Manica Province there are 1600 now homeless people camping in 3 schools as houses have been destroyed, whilst 2km outside of the town people remain stuck in trees as the rain continues and roads and bridges have been swept away. Dombe has been severely hit with virtually impossible road access and no communications, with 50 people reported dead already.

Access into rural communities remains incredibly difficult and our rehabilitation efforts are likely to be delayed. Yet, unfortunately, following this disaster an increasing number of people are now without access to safe water as fully working safe water sources have now been swept away.

More than ever, the provision of clean water in the disaster-stricken regions is vital. From standing flood water, high numbers of unrecovered causalities and pollution from destroyed infrastructure and vehicles, water-borne diseases will be rife and ground water supplies contaminated. Affected people are reported to be drinking unchlorinated well water due to the lack of safe, accessible options. The entire populations of affected areas are vulnerable within a disaster like this, although the young, pregnant and old are more susceptible to the associated risks, making the provision of safe water essential.

As extensive flooding continues, and more rain expected over the coming days, our thoughts are with those most affected, relief workers and members of society donating their time and energy to help the devastated regions. There is likely to be a long road ahead to recovery in Mozambique, and CO2balance are committed to continuing our efforts to provide safe water in Manica Province.